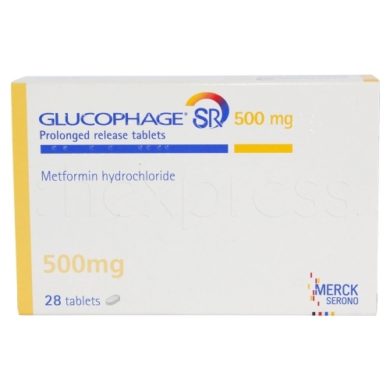 Metformin, commonly referred to as Glucophage is classified as an oral anti diabetic drug that belongs to the biguanide class. Glucophage is a first line medication used for the treatment or control of Type 2 Diabetes, especially in patients that are obese and have kidney problems. However, when it comes to gestational diabetes, the use of Glucophage is limited due to safety reasons.

Aside from diabetes, Glucophage is also used as a treatment for polycycstic ovary syndrome. There is also evidence (through studies) which shows that Glucophage can be used for other conditions where insulin resistance may be a significant factor.

Compared to other similar drugs, Glucophage is the only anti diabetic medicine that is known to prevent cardiovascular diabetic complications.

How does Glucophage work?

Glucophage (metformin) works by inhibiting glucose production in the liver. Not similar to other anti diabetic drugs, it does not cause the patient’s body to produce more insulin. Because of this, Glucophage rarely causes hypoglycaemia (low blood glucose) when used alone. However hypoglycaemia may be experienced when this medicine it used along with insulin or other diabetes drugs like nateglinide, repaglinide, or sulfonylureas.

How do I take Glucophage?

The length and dosage of Glucophage depends on the condition of the patient and how he/she reacts to the medication.
Generally, Glucophage should be taken with a meal, one (1) to three (3) times a day (depending on the doctor’s prescription). In some cases, Glucophage is combined with other medicines (usually insulin or other diabetes pills) in order to make the treatment more effective. Because Glucophage works differently compared to other similar diabetes drugs, it will not cause interference to their action.

Are there side effects?

Can I buy Glucophage online?

Yes, you can buy Glucophage easily and privately online. First, you must fill out a short consultation form which will allow a doctor to write you a prescription. Make certain that you give the doctor relevant medical details. Once the doctor approves the medication and sends the prescription to the pharmacy, you should have it in less than 48 hours.