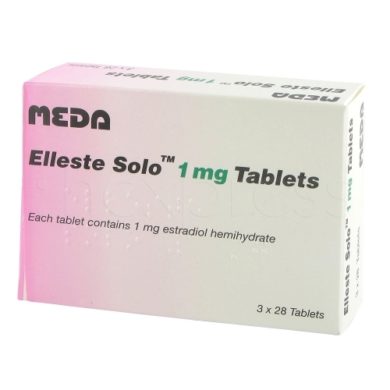 Elleste Solo MX is a type of hormone replacement therapy that contains the female hormone oestrogen. Elleste Solo MX is used by millions of women worldwide to help manage often extreme and undesirable symptoms of menopause. Elleste Solo MX helps to significantly alleviate those symptoms, but it is generally only prescribed when the symptoms are severe and they impact a patient’s daily life.

How does Elleste Solo MX work?

Elleste Solo MX combats the side effects of menopause in women by slowly releasing a synthetic version of the body’s natural oestrogen, a naturally occurring hormone whose production slows significantly when women enter menopause. The synthetic version of oestrogen, called estradiol, is derived from plant materials and is found to be effective in reducing the number and severity of hot flashes in most women who take the drug as instructed by their doctor.

How do I take Elleste Solo MX?

Elleste Solo MX is administered to the body via the transdermal patch. The patch is applied to the skin and the estradiol is gradually released by metered amounts into the bloodstream from the sticky side of the patch. A patient using Elleste Solo MX can expect to get approximately 40 micrograms of estradiol per day. The patch must be replaced on a weekly basis.

Continue to administer Elleste Solo MX as directed by your doctor. Also, if your periods are still regular, you should begin the treatment regimen within 5 days of the start of your bleeding.

The patch should be placed on dry, unbroken parts of your skin such as the hip area or lower back. The skin should be free from oils, moisturisers and powders. When you remove an old patch and apply a new one, place the new patch on a different part of the body, well away from the location you have previously used. Once placed, it should not be removed from the skin until you are ready to use another patch.

Are there side effects?

Before taking any hormone replacement medication, speak to your doctor about the risks involved prior to making a decision.

How do I purchase Elleste Solo MX online?

Elleste Solo MX can be purchased online through loxdoc. First you are required to do complete a brief consultation with a qualified doctor. Once you have been approved for the prescription, the medication will be delivered to you in less than 2 days; in most cases you are likely to receive the medicine within 24 hours.

There are no reviews yet.

Be the first to review “Elleste Solo MX” Cancel reply

We’ve detected that you are using AdBlock Plus or some other adblocking software to prevent the page from fully loading.

We don’t have any banner, Flash, animation, obnoxious sound, or popup ad.

We do not implement any ads!

Some of our website necessary functionality are getting blocked by this kind of extensions.

Please disable your adblocker or allowlist this site!